Full Text
SUICIDE OF JOHN TCHERNIAC.
Left Acton Saturday Afternoon and
Took Morphine in Royal Hotel,
Guelph.
TOOK NOTES OF EFFECTS OF DRUG,
John Tcherniac, who had been employed on Silver Spring Farm by Mr. G. A. Black last summer and the past few months, went to Guelph on Saturday afternoon. About two o'clock on Sunday afternoon he was lying dead on the bed in his room in the Royal Hotel with his clothes on.
Death was due to morphine, of which he had evidently taken about 30 tablets, using chocolates to dispel the taste. Life had been extinct for some hours, according to the examination of Coroner Savage. The suicide was a most peculiar one, in that the victim had made an attempt to chronicle his condition as long as possible after he had taken the first dose, although his statements were somewhat unintelligible and disjoined. He left the following notes, descriptive of his approaching death:
The druggist said fifty tablets would kill a horse. Therefore, thirty ought to be enough for me, if not, the druggist does not know his business - I hope to die.
The only few friends I have are G. A. Black, of Acton, President Creelman of the O.A.C., and Doc. Coxe, of Acton. Forward my watch and clothes to Coxe, Acton.
Morphine taken at five minutes to 11.
Fifteen minutes after 11 - Am sweating as if I were pitching hay on a hot July day. I have just taken five more tablets.
Nineteen after 11 - Am beginning to have difficulty. Twenty after 11 - Have - (notes here are undecipherable). I feel no pain, - just took five more. I put them inside chocolates.
I forgot, I have one more friend - the druggist who sold me thos-.
Twenty-five after 11 - I have just taken five more tablets. It won't be long now.
A letter was also found from his mother from Cannes, and a couple of applications for work. The deed had evidently been premeditated, as he only had eight-one cents in his pocket, not enough to pay for the night's lodging. He registered Saturday afternoon.
Tcherniac was a student at the Ontario Agricultural College a couple of years ago. He was then considered a kleptomaniac, and was convicted of a couple of thefts in Guelph. He was dismissed from the college. He came to the college from London, Eng., and was known as a remittance man.
Tcherniac was about twenty-one years of age. He was well-known about Acton, and last summer participated several times in the swimming matches in Fairy Lake. In one of these he took cramps and narrowly escaped drowning. Late in the fall he reported that he had received a cablegram saying his mother was seriously ill. He borrowed $50 to purchase a ticket to England. He never went and a few weeks afterward was arrested in Toronto for forging a cheque and attempting to jump his board bill at the Grand Union Hotel. He came back to Mr. Black's several months ago.
In the notes found there was no reason given for the awful deed, but it had certainly been premeditated. He had evidently made up his mind never to leave the hotel.
Media Type
Genealogical Resource
Newspaper
Item Type
Clippings
Date of Publication
18 Jun 1908
Last Name(s)
Tcherniac 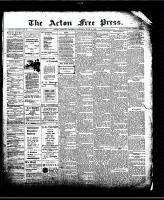