For information about photographs, news articles, or other information included in this database, please contact the Local Collections Librarian by email.

OAKVILLE - Paintings from the collection of former Ontario Lieutenant-Governor, Hon. Ray Lawson and one by Canadian artist Harold Towne, will highlight the annual Oakville University Women's Club's Art Show at the Oakville Arena May 15-19.

Art Show organizer, Mrs. Barbara Katzman, yesterday aid the paintings from the Lawson collection will be among many representing Canadian art over the past century.

Mrs. Katzman said the seventh annual exhibit includes art objects of both historical and artistic interest. "We have secured some very valuable pictures for the show," she said, "particularly those on loan from Mr. Lawson."

Although only a small number of art objects will be on display, Mrs. Katzman said the collection will be one the public can appreciate and remember.

She said the collection can be broken down into divisions of Canada's history:

-Three wood carvings from the French Colonial period will be the oldest art objects on display;

-A Kreighoff painting from the Lawson Collection is to highlights and representing the British Colonial Period;

-A painting by the well known French-Canadian artist, Suzor Cote, is to represent work created at the turn of the century;

-Contemporary art after 1930 rounds out the collection.

Paintings acquired from the Lawson Collection include three by Canadian artist Joseph Guinta which Mr. Lawson purchased when he was living in New York City during the mid-1950s.

The UCW declined an offer to display a series of Eskimo wood carvings owned by Mrs. Lawson because of their value. 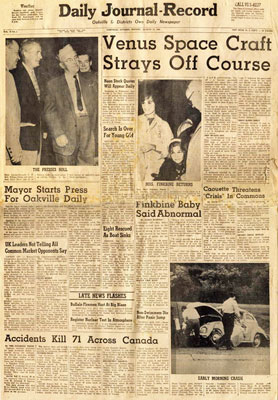