Full Text
A VISITING MOTHER SORELY BEREFT
Mrs. Cassius Campbell, of Ottawa,
Received News of the Death of Her
Soldier Son in Action
When Hon. David Henderson and Miss Kerr returned from Ottawa at the close of the session of Parliament, Mrs. Cassius Campbell, Miss Kerr's sister, accompanied them and has since been a guest at Mr. Henderson's house on Bower Avenue.
On Saturday morning the sad news reached Mrs. Campell that her son, Lieut. Kenneth C. Campbell, had been killed in action.
Mr. Elmer Campbell, B.A., and Principal Spence, son and son-in-law of Mrs. Campbell, arrived from Ottawa on Saturday to break the sad news. Mrs. Campbell and Miss Kerr returned to Ottawa with them that evening. During her visit here Mrs. Campbell made numerous friends and general sympathy is felt for her in the great loss sustained.
Lieut. Campbell was a promising and popular young newspaperman, had been a member of the staff of the Wall Street Journal and was financial editor of the Montreal Mail when he volunteered for overseas service. Lieut. Campbell left Canada with his battalion on November 6th last. He went to France in January last, and into the trenches for the first time early in February. Some time ago his engagement to Miss Ethel Jennings, daughter of Mr. and Mrs. C. A. C. Jennings, 398 Markham Street, Toronto, was announced. The marriage was to have taken place upon the return of the young soldier from the front.
Media Type
Genealogical Resource
Newspaper
Item Type
Clippings
Date of Publication
15 Jun 1916
Last Name(s)
Campbell 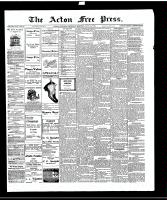